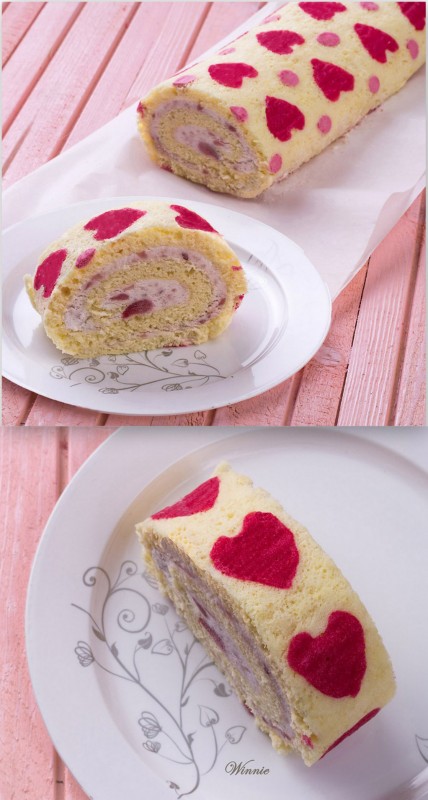 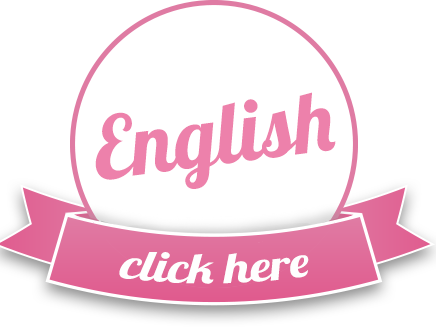 Bake in the large pan of the oven.
Make the filling first as it should be ready when the cake comes out of the oven.
In a small saucepan over a medium-low heat, stir the sugar + water + cornflour. Add the strawberries and bring to a boil, stirring constantly. Take off the heat and cool.
Melt the chocolate pieces with ¼ cup of heavy cream over a bain-marie or in the microwave (using short pulses) stirring until the chocolate is fully dissolved. Cool, and then pour into the strawberry mixture.
Whip the 3/4 cup of the heavy cream with the vanilla extract and strawberry/raspberry extract until you get soft peaks, and fold into the strawberry mixture.

Making the pattern: In a small bowl put the egg-white and then stir in the sugar and the flour. Add some drops of food-colors and stir. If you’d like the pattern to be with some colors (like mine), then divide the mixture into several parts and add a different color to eachone. Put the mixture (or mixtures) in a piping bag (or bags) with a small round tip,
Attach the pattern-page to one end of the pan (the small one). Don’t worry that it doesn’t cover all the pan. Once you roll the cake this part (without the pattern) is inside the roll.
Place a baking sheet over the pattern-page grease it a little and pipe according to the pattern.
Put the pan in the freezer for at least 30 minutes (mine was 2 hours)

Baking the roll: Preheat oven to 400F.
In a little bowl stir the flour and the cornflour.
In a stand-mixer beat the egg-white on a medium speed, after a minute add the cream-of-tartar, continue beating. Once some foams are formed add the sugar gradually and beat on high speed to a steady and glossy peaks (but not stiff).
In a separate bowl, whip (by-hand) the egg-yolk with ¼ cup of sugar. Fold in gently the egg-whites to a uniform mixture. Fold in half of the melted butter and half of the flour mixture. Now fold in the 2nd half of the melted butter and flour.
Take the pan out of the freezer, and remove the patter-page (which is underneath the baking sheet). Spread the cake batter over the pattern and smooth and flatten it with a spatula. Do it fairly quickly (especially when it’s hot in the room).
Move your finger around the sides of the pan and bake for 7-9 mins. The cake should springs back when touched, and the edges should not be too golden.
While the cake is still in the oven, prepare 2 more baking sheest. Place one on the counter and sprinkle it with 1 TB of sugar. The moment you remove the cake from the oven, flip the pan over this baking sheet. Gently peel off the used baking sheet.
Now comes the critical step – place the second new baking sheet over the cake and flip it again! (if you don’t do this, once you roll the cake, the pattern will be inside and not outside).
Remove the baking-sheet which is on the top (the one you sprinkled sugar on).
Spread the filling (no need to wait for the cake to cool), and roll the cake to a tight roulade – starting with the end that has no patter on it. Refrigerate for a few hours before serving.

Click here to see where else I've shared my delicious recipe!

Never miss another recipeSign up now to get updates